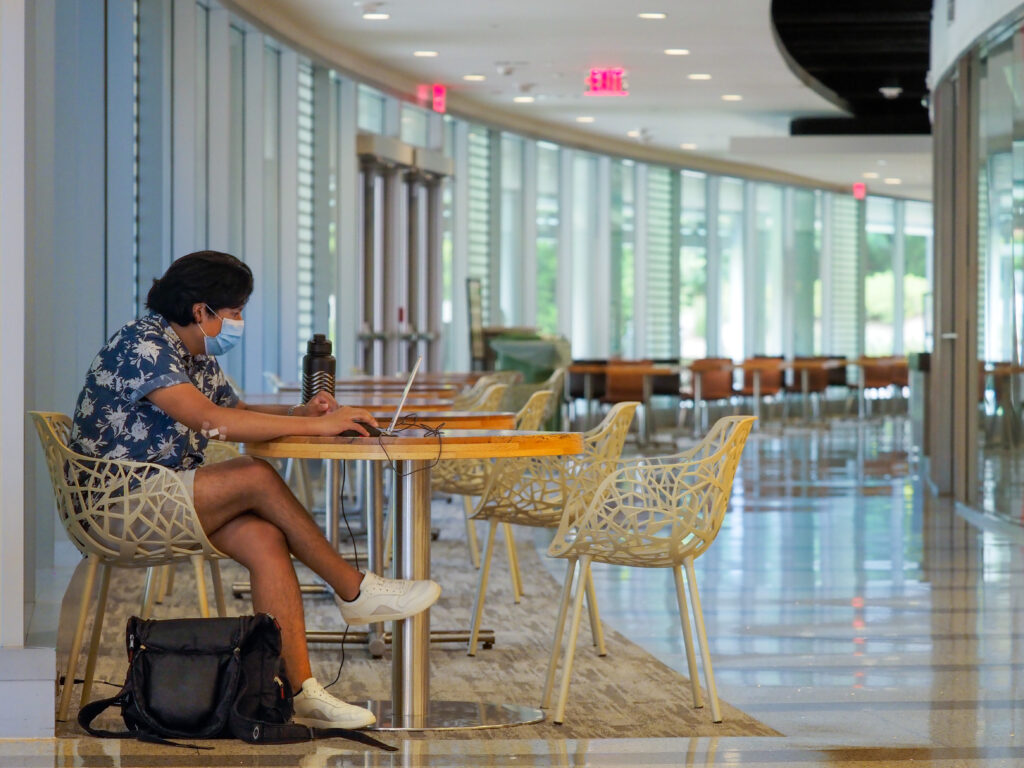 A College of Natural Resources student works on his computer in Talley during the
COVID-19 pandemic. Photo by Marc Hall

Most people rarely think about the underlying technologies that enable their devices to connect to the internet seamlessly. Something as basic as wiring to computers or access points can create connectivity issues if they are never updated, and devices will only function as well as the technologies that support them.

To ensure that students, faculty and staff can access the campus network and internet, NC State devised a strategy 10 years ago to update its wiring infrastructure to the Category 6a standard. After a tedious transition of more than 30 academic and administrative buildings, the $5 million wiring project was recently completed, says Ed Rogers, director of engineering and construction in OIT Communication Technologies.

Advances in wiring technology have increased exponentially over the past three decades. Category 6a is the current cabling standard with a capacity of 10 gigabits per second and a maximum bandwidth of 500 megahertz (MHz), far exceeding the cabling standard used in the original campus wiring projects that occurred in the early 90s and the 2000s.

In the early 90s, the Category 5 campus wired system had a maximum data rate of 100 megabits per second over a bandwidth of 100MHz. In today’s standards, that would be considered just above average for speed.

Category 6a wiring is the suggested wiring standard for academic institutions and NC State is one of the first universities to deploy that type of cabling, beginning in 2010, Rogers said. According to Rogers, many institutions are only now starting to upgrade to this level of wiring.

Nelson Hall, Dabney Hall and the College of Veterinary Medicine’s Main Building were among the larger of the 32 buildings whose wiring infrastructure was updated to Category 6a. The targeted buildings for this project were previously wired with Category 5 in the 1990s. Rogers oversaw the change to the infrastructure with the support of 12 university employees; he also hired contractors to perform the physical installation.

Upon initial installation of internet infrastructure at NC State, there was discussion of how to organize this cabling system that runs throughout all the buildings at the university. Rather than running loose cables above ceilings or through walls, Rogers said they devised a plan to run them through a pathway system that could be accessed easily and replace cables in the future.

The biggest concern for this project was to avoid disruption in classrooms and offices; internet disruptions needed to be taken into account as well. Temporary cables had to be installed to allow availability to the campus network while the old cables were removed and replaced with the 6a standard. Then once more, the temporary cables needed to be removed.

According to Rogers, university students, faculty and staff will enjoy somewhat faster network speeds, but ultimately as new technologies such as next-generation wireless access points are released, the wiring will be able to support these devices.

The completed upgrade should be able to handle any technological changes for the next 15 years, he said.