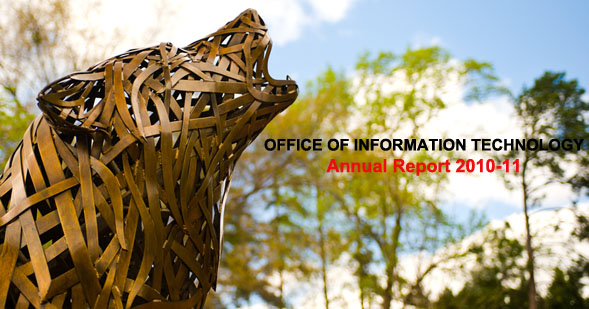 Strategic planning was the driver of NC State’s Office of Information Technology (OIT) Priority Roadmap for fiscal year 2010-11. In an economic downturn, OIT was presented with both challenges and opportunities as it strived to manage its day-to-day operations, while meeting regulatory requirements, improving existing services and delivering critical new ones to the campus community.

Focusing inwardly, OIT streamlined its organizational structure and internal operations to reduce complexity and redundancies and to improve its overall information communication technology (ICT) services. Externally, OIT partnered with other campus IT organizations to initiate a new IT Governance structure that will strategically align campus’ IT objectives with the University’s mission – essentially defining the future direction of IT on NC State campus.

Managing an IT environment on a campus the size of NC State continues to be a complex task. To improve the use of IT as a driver for change for the university, OIT initiated a three-phase strategic planning process. The first phase was the development of a Strategic Operations Plan (SOP) in the fall of 2008, which focuses on how OIT teams work together as an organization. Last fall in partnership with other campus IT organizations, OIT initiated the second phase – improving IT Governance. The final phase will be to work collaboratively with the university to develop an NC State Strategic IT Plan.

A new inclusive IT Governance model for the university began to emerge this fiscal year – bringing OIT and college/departments IT efforts together like never before! This new structure will allow university IT to focus on five strategic areas: strategic alignment, value delivery, resource management, risk management, and performance measurement.

A major highlight of the IT Governance structure will be the formation of the IT Strategic Advisory Committee (ITSAC). Representing major functional activities on campus, ITSAC will focus on strategic alignment of IT with the University’s mission and goals. The new structure plans include the IT Leadership Committee (the Chief Financial Officer, the Provost and the VCIT as chair); the General Advisory Councils (the Faculty Advisory Council, Staff Advisory Council and the Student Advisory Group); several Advisory Committees in connection with specific projects or programs; and the Campus IT Directors, who will vet infrastructural and architectural decisions and recommendations from the various committees to the VCIT. The IT Governance structure is expected to be fully formed during the fall of 2011.

During this fiscal year, OIT also embarked on a reorganization and numerous projects to increase its operational effectiveness and efficiencies. Highlights include:

Other major achievements and milestones

OIT administered an employee satisfaction survey to assist in helping managers at all levels to identify more specific changes they may need to make to enhance the success of their team, unit and organization. The survey was one of the key initiatives of a draft plan that CIO Dr. Marc Hoit and the OIT Directors developed to address the top employee concerns raised as part of the March 2011 Town Hall meeting and manager’s Power Hour closeout session. The survey also included several questions about overall satisfaction, OIT communications and the work of the Employee Relations team.

RECOMMENDATIONS AND CONCERNS FOR THE FUTURE

Enhance the success of our students through educational innovation

Enhance scholarship and research by investing in faculty infrastructure

Enhance organizational excellence by creating a culture of constant improvement