On April 28, 2010, OIT held an open house for the Stinson Collaborative Commons. The OIT Unity Laundry Lab was renovated and reimagined as a collaborative work space for students.

A shorter version of the report is available as a .pdf file

OIT was formed in fall 2007 to consolidate the university’s central academic, research and administrative IT organizations and to improve the efficiency, effectiveness and coordination of information and communication technologies (ICT) at NC State. OIT is  responsible for planning, providing and supporting the use of the university’s core ICT, ranging from its data networking and cyber-infrastructure to essential software and administrative information systems.

During 2009-10, campus and statewide budget cuts strengthened OIT’s commitment to collaborative engagement, innovation, agility and alignment. While OIT provides NC State’s essential campus-wide ICT infrastructure and services, OIT is responsible for less than half the university’s ICT staff,  desktop computers, servers, student computing labs and research computing. Everyone was hit hard by the 2009-10 fiscal year budget cuts. OIT’s budget reduction was $2,357,502 (10% of state appropriated funds), and the equivalent of 24 full-time positions were lost. Meanwhile campus needs and expectations for OIT’s help and services increased, along with security risks, and state and federal regulatory requirements. Rather than reduce the scope of OIT services and engagement, OIT has pursued new options for partnerships, strategic alliances, service delivery and decision making. Highlights include:

Other major achievements and milestones 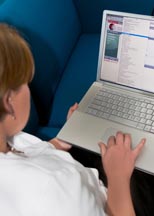 Note: These projects predate OIT as an organization, since OIT was formed in late 2007 and did not participate in the most recent Compact Plan process.

OIT’s most visible Diversity Initiative continues to be its IT Accessibility Services, which support the university’s commitment to equitable access to opportunities for students and employees with disabilities. Working in partnership with accessibility experts and colleagues at NC State and other institutions, this service focuses on identifying, deploying and educating Web developers, content providers, faculty and others on best practices and proactive solutions to ensure the accessibility of  the university’s IT resources.  During 2009-10, OIT helped lead the formation of NC States’ new campus-wide IT Accessibility Advisory Working Group. The group will help redefine the job description and lead the search for a new University Coordinator of IT Accessibility.

Rick Brown is serving on the Board of Directors for Association of Higher Education Cable Television Administrators (AHECTA) and is co-chairing the 2010 national conference.

Mark Scheible serves on the  EDUCAUSE IAM Working Group and was appointed to InCommon/Internet2 CAMP Program Committee for its annual workshop.  Mark will co-lead the Pre-Conference and moderate the Technical track.

Greg Sparks is completing the first year of a two-year appointment as Chair of the UNC NetStudy working group.

Cheryl Cleveland presented “The What, Where and Why of PeopleSoft Upgrades” at the Oracle Alliance 2010 Conference in March. Yessy Mendoza-Tate and Tom Reynolds also presented at the conference.

Mark Scheible was a guest speaker on the InCommon IAM Online series. He spoke on “Hot Topics and Current Issues in Identity and Access Management” on March 11.

“X as a Service, Cloud Computing, and the Need for Good Judgment,” by Dr. Henry Schaffer, published in the September/October 2009 issue of IT Professional, a publication of the Institute of Electrical and Electronics Engineers (IEEE) Computer Society.

“Cloud with a Long Tail: The VCL in Support of Pedagogy,” by Dr. Henry Schaffer and Dr. Sarah Stein, published in the May/June 2010 EDUCAUSE Review.

Jason Valencia won a Provost’s Spotlight on Disability award for his work with the Disability Services Office.

Wenyi Li received a University Housing Service Award for “the outstanding contributions she made to the development of the Housing System.”

RECOMMENDATIONS AND CONCERNS FOR THE FUTURE

Staff:  All OIT units have ongoing concerns about the budget and the availability of resources, including management resources to oversee and coordinate the large volume of planned technical activities and funding resources to provide competitive salaries to retain and recruit adequate staff to support complex services and increasing customer and compliance requirements. The wide dispersion of OIT staff across campus continues to significantly impede communication collaboration and cohesion.
Recommendations: Maintain senior management commitment for sufficient resources for priority projects; work to resurrect the “Triangle rate” for IT banding and find funds to reward top performers.

Technology: NC State’s need for a new data center became distressingly apparent this year, as several power and cooling incidents in the university’s primary data centers led to service outages and risks to critical university system and data. Both data centers are operating at capacity. This has led to the proliferation of server rooms across campus roughly equaling the amount of servers and equipment in the central data centers, but at much higher operational and energy costs. Campus-wide, ICT is responsible  for more than 5% of campus electricity consumption, and the campus Climate Action Plan is calling for strategies to improve power management in data centers and for computers across campus. Other technology concerns include the content licensing implications of the new I-based cable TV service for students and the ability to respond to the rapid evolution of wireless and mobile technologies. For example, while OIT plans to deploy next-generation Wi-Fi technologies (802.11n), competing cellular technologies may require a separate infrastructure.
Recommendations: Maintain engagement of university leadership in ICT issues and raise awareness that investing in many high-priority ICT projects can serve the university’s goals while saving operational costs.